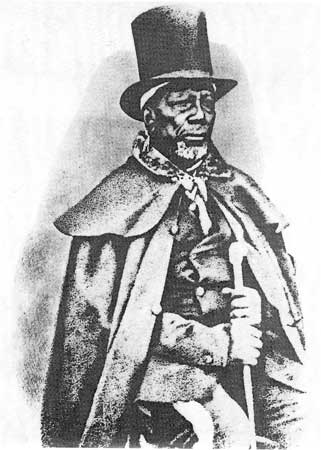 Although it is a young independent nation, Lesotho's history goes back millions of years and owes its origins largely to the genius of King Moshoeshoe the Great (1786-1870)........... 1815-29 Moshoeshoe gave protection to the remnants of the various nations that fled from Zulu and Matebebele raids, into the highlands of what is now Lesotho...........1824 Moshoeshoe united his followers and ensured the birth of the Basotho nation, establishing a stronghold at Butha-Buthe and later at Thaba-Bosiu (Mountain of Night) less than 30km from the capital city of Maseru.

Moshoeshoe not only defended his people from Zulu raids but preserved their independence against the Boers...........1830s Moshoeshoe welcomed Catholic and Protestant missionaries who brought religion and formal education to Lesotho. Moshoeshoe was known for his outstanding diplomacy, tolerance, generosity and compassion. According to Casalis (1861) Moshoeshoe learned all this from his mentor, chief Mohlomi, who also remains a very Prominent figure in Basotho history because of his unparalled wisdom during his time. He had taught Moshoeshoe to:

“deal justly with all, especially the poor; to love peace more than war and never kill anyone accussed of witchcraft.”

As a result of this tutoring, Moshoeshoe paid tribute to king Shaka when he learned that he was preparing to attack him. Together with other gifts he sent Shaka ostrich feathers. Moshoeshoe also gave cattle to the cannibals who had devoured his grandfather - because they must have been too hungary - instead of viewing them as enemies. Basotho believe that if there is peace there will be rain and plenty, hence the slogan “Khotso Pula Nala” (Peace, Rain and Plenty or Prosperity).

Following wars with the Boer settlers in 1858 to 1865, Moshoeshoe placed himself and his people under British protection in 1868, establishing the protectorate of Basutoland. Under the terms of the agreement ending the war the dual legal system was introduced – Roman Dutch Law and Sesotho Customary Law - which is still in operation in Lesotho today. In addition, the present day boundaries of the country were established; the Basotho lost much of their territory...........After Moshoeshoe died in 1870 the protectorate was annexed to Cape Colony in 1871, but this caused increasing friction. Eventually the Gun War of 1880/1 broke out, with most of the country in open rebellion........... 1884 Basutoland (as the country was then called) was restored to direct control of Britain........... 1952 the Basotho Congress Party (BCP) was founded, under the leadership of Dr. Ntsu Mokhehle, to agitate for immediate self-government, and against the racially-discriminatory practices filtering across the boarder into Basutoland........... 1958 the Basotho National Party was founded under the leadership of Chief Leabua Jonathan, the BNP opposed the radicalism of the BCP........... 1965 as a consequence of the BCP campaign the British were obliged to grant self government.

October 04, 1966 the colony of Basutoland became an independent Kingdom of Lesotho, and adopted not only a constitutional monarchy, but also as most other former British colonies – a First-Past-The-Post (FTPT) electoral system, with King Moshoeshoe II as Sovereign, and Basotho National Party (BNP) won the first elections and Chief Leabua Jonathan became the Prime Minister........... 1970 the rulling BNP appeared set to lose the first post-independence general elections when Prime Minister Leabua Jonathan declared a state of emergency, suspended the constitution and imprisoned Basotho Congress Party (BCP) leadership. King Moshoeshoe II was briefly exiled, but he returned after a compromise with Jonathan........... 1970-86 Lesotho experienced the era of de facto one-party rule in the reign of the Basotho National Party........... The third phase of Lesoth's political developments was the military authoritarian rule of the years 1986-9 when Major General Metsing Lekhanya overthrew Chief Jonathan on 20 January 1986 in a military coup........... 1990 after prolonged disputes with Major Lekhanya over power, Moshoeshoe II went into exile, and in November 1990 Moshoeshoe's son (King Letsie III) became king but was reduced to a purely ceremonial role. Major General Lekhanya was ousted in April 1991 and the new military leader, Major General Elias Ramaema, promised a return to democracy. In July 1992 Moshoeshoe II was allowed to return to a hero's welcome........... 27 March 1993, in the first democratic elections in 23 years, the Basotho Congress Party, won a landslide victory captruring all 65 constituencies with over 70% of the vote, and party leade Dr Ntsu Mokhehle became Prime Minister........... August 1994 Lesotho's first democratically elected government faced a major challenge when King Letsie III staged a coup which was backed by the military and deposed the BCP government and imposed “Rulling Council”, indicating publictly that he wished to return the crown to his father. The ‘Palace Coup’ collapsed as it was condemned internally and internationally. Through international mediation an agreement was reached whereby , the elected government returned to power and Mokhehle remained the Prime Minister and Moshoeshoe II was reinstalled as King of Lesotho........... January 1996 King Moshoeshoe II was killed in a car crash and his son King Letsie III resumed the throne........... 1997 the rulling BCP split over leadership disputes and Prime Minister Ntsu Mokhehle formed a new party, Lesotho Congress for Democracy (LCD), and was followed by a majority of Members of Parliament, which enabled him to form a new government, reducing the BCP to the opposition........... 1998 Mokhehle retired from politics (he died a year later) and was succeeded by Mr Pakalitha Mosisili who led the LCD in the elections held between 24-26 May 1998. LCD swept the board in 1998 elections with 61% of votes and 79 out of 80 possible seats in the National Assembly. The Basotho National Party won 25% of votes and secured only 1 National Assembly seat, while Marematlou Freedom Party received about 1% of the votes and a nil in the National Assembly. Protests by the opposition parties led to civil war........... September 1998 LCD Government requested South African Development Community (SADC) countries to intervene. South Africa and Botwana sent troops into the country to restore order. November 1998 the negotiation process, which was brokered by South Africa on behalf of SADC, delivered a peace settlement involving the establishment of the Interim Political Authority (IPA) consisting of two members from each of the twelve parties contesting the 1998 election, to review Lesotho's electoral system in preparation for new elections within 18 months............ 25 May 2002 elections were held under a revamped electoral system designed to increase opposition representation in the parliament. The Lesotho Congress for Democracy won an overwhelming majority once again with 54.9% of the votes and secured 77 out of 118 National Assembly seats, Pakalitha Mosisili remained the Prime Minister. The opposition parties secured National Assembly seats as follows: Basotho National Party 21, Basotho African Congress 3, Basotho Congress Party 3, Lesotho Peoples Congress 5, National Independence Party 5, Lesotho Workers Party 1, Marematlou Freedom Party 1, Popular Front for Democracy 1, National Progressive Party 1............ A split in the LCD in October 2006 reduced its majority in parliament to one vote and led to new election on 17 February 2007 which resulted in an LCD victory. Parties and coalitions that contested for 2007 election won the seats follows: Lesotho Congress for Democracy (LCD) 51.3%, National Independent Party (NIP) 17.6%, All Basotho Convention (ABC) 14.3%, Lesotho Workers Party (LWP) 8.4%, Basotho National Party (BNP) 2.5%, Alliance of Congress Parties (ACP) 1.7%, 3, Basotho Democratic National Party (BDNP) 0.8%, Basotho Batho Democratic Party (BBDP) o.8%, Popular Front for Democracy (PFD) 0.8%, Marematlou Freedom Party (MFP) 0.8 % and New Lesotho Freedom Party 0.0%........... Serious drought and food shortages became an enourmous 2007 post election challenge........... July 2007 Prime Minister Pakalitha Mosisili appealed for international aid.